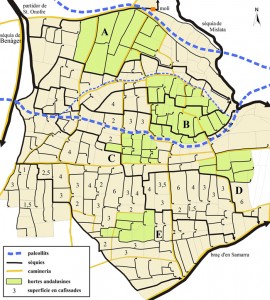 Property map of the Quart irrigation canal (horta of Valencia); in green, the hydraulic spaces dated to the Andalusi period

The scholarly debate around the Roman or Muslim origins of Mediterranean alluvial hortes has been going on for a long time. This debate, strongly coloured by ideological considerations, has often lacked solid research-based knowledge, and was at any rate but poorly oriented from the outset. The determination to find ‘the beginning’ of agricultural systems which, it was assumed, had originally been built exactly as we know them today, totally precluded any attempts to define the social characteristics of the social groups which created and worked these same agricultural spaces. The Andalusi origin of the horta of Valencia was demonstrated some time ago. This thesis is aimed at examining the social features of the Andalusi society that built it and the transformations undergone before the arrival of the Christian colonists in the wake of the 13th century conquest, through the examination of the remains of its agricultural structures (hydraulic systems, settlements, etc.). To date, research has shown evidence for a segmented and tributary society, as defined by Pierre Guichard in his work on al-Andalus, published over 35 ago. This clearly reflects on the morphology of the system in operation in the horta of Valencia during this period. In summary, the objective of this research is to analyse the agricultural spaces created by peasant groups in order to reveal their social organisation and work processes. This will be achieved through the application of the methodology of so-called hydraulic archaeology, which combines: (i) the survey and reconstruction of hydraulic spaces; (ii) their morphological interpretation and the identification of different construction phases; and, finally (iii) the combination of the data thus obtained with the information provided by the written record and other archaeological investigations.

pdf text: You can read the thesis here (visualització) 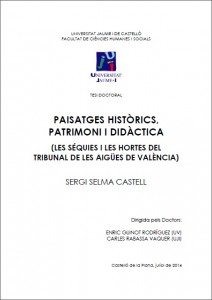 Séquies and hortes under the jurisdiction of the Tribunal de las Aguas de Valencia (Water Court of Valencia), a subject relevant from historical, landscape, heritage and cultural perspectives, are here characterised, analysed and described in detail. The study is divided into three major thematic blocks, including the evolution of the historical landscape of the horta, the material and immaterial cultural heritage derived from its construction, and the didactics and resources involved in the imbrication of its study within the framework of social sciences teaching in the Spanish educational system. The archaeological and historical research carried out in the Horta of Valencia has helped to define these historical landscapes from a historical and archaeological perspective, while setting forth a methodological proposal for the analysis of similar spaces throughout the Mediterranean. The historical examination of séquies results in a full characterisation of hydraulic systems, including water catchment, flow distribution and even the use of water power. With reference to this, a glossary of terms describing the wide variety of hydraulic structures found in historical hortes in the Kingdom of Valencia, is offered. Once the cultural and historical criteria for the characterisation of historical and cultural landscapes (and their heritage implications) have been outlined, the didactic value and, more specifically, the potential of this resource for teaching are also defined.

pdf text: You can read the thesis here 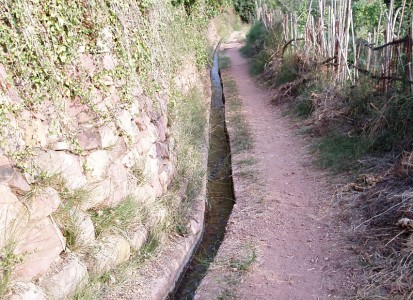 This doctoral thesis was carried out within the framework of a cultural heritage study programme. Medieval and landscape archaeology methodologies were followed. The aim was the study of Andalusi landscapes on the southern face of Sierra Calderona, the point of contact between the mountainous region and the plains above the horta of Valencia. This local analysis is taken from a European and Mediterranean perspective, along the lines set out by Barceló, Guichard, Kirchner, Guinot, Malpica and others for the analysis of Andalusi rural society and its landscape management. In this regard, the study and cataloguing of Andalusi rural spaces, mostly dedicated to irrigation, but also including dry land agriculture, is intended. This will be achieved through the analysis of the long term evolution of medieval landscapes and the agricultural infrastructures built by medieval societies, assessing their relationship with the settlement pattern. This will involve the examination of the typically Andalusi tribal colonisation and the processes triggered by the feudal conquest. In addition, the study is also oriented towards the development of tools for the preservation of this important item of cultural heritage, its valorisation as a sustainable economic resource and the activation of cultural resources. 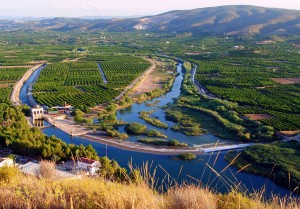 Irrigation dam on the Jucar river, and beginning of the royal irrigation canal (left)

The study and reconstruction of the medieval rural landscape irrigated by the royal séquia in the river Júcar, or Séquia nova d’Alzira (as referred to in medieval documents), before and after the Christian conquest and the construction of the canal in 1258. The work is limited to the area affected by this major infrastructure, built in connection with Jaime I’s colonisation projects in the region of Ribera Alta, between Antella and Algemesí. The methodology used is based on morphological analysis, intensive land survey and the methodology embraced by the so-called hydraulic archaeology, in this particular case applied at an unusually large scale, determined by the length of the main canal (22 km).